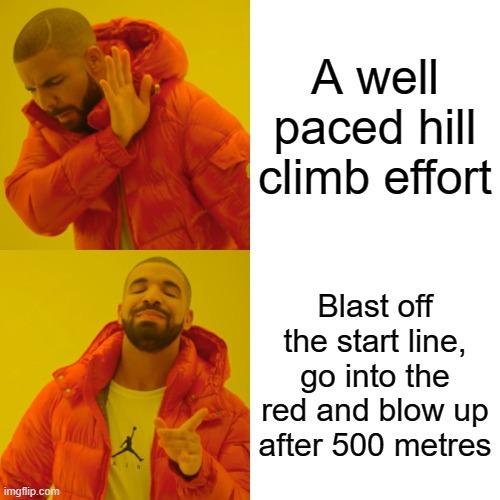 Week 13 and our second attempt at racing up the Yak. Second time lucky, at least from a weather perspective. Chris Howie told me after the race that some of his Pentland Velo friends had cycled to North Berwick for fish & chips last night, I think we both know Chris made the right choice by racing. You’ll need a box of Gaviscon after cycling on a bag of chips anyway, plus the Pentland Velo lads wouldn’t have been able to go for an evening dip in the sea either because of Raab Rules – ie “the sea was closed.”

The nights are drawing in, when I returned home at about 8:45 it was nearing darkness. So the last weeks of TTing will have 6:30 start times, or 6:31 if you’re being pedantic.

A pleasant albeit glary sunset greeted us all but once you hit the shade you got a bit chilly. I’m not complaining though, as I still have the memory of two weeks ago in my mind. It was nice getting home and not having to wring the water out of every clothing item and orifice. I also have the memory of two weeks ago, because not only was I soaked when I got home, but it was also the Girls Night In - where I ended up watching the Kissing Booth 3. The Kissing Booth 3 is still as utterly shite as it was two weeks ago, that memory certainly hasn’t changed. Though, talking of shite films, Hannah and I have had a bit of a James Bond odyssey these last few months - we are steadily working our way through the back catalogue. We’re on the Roger Moore era, nostalgia aside, gosh they’re undeniably crap. The Spy Who Loved Me was the most recent watch. When I was a younger lad this felt like one of the better ones, but oooft, in 2021 it’s just 2 hours of innuendos and farce. The Russian Agent is called XXX for god’s sake! If you pause and contemplate for a moment the fact that Jaws survives the following:

Moonraker is on the horizon and I’m not sure I can do it to myself – a pigeon does a double take! I suppose it’s also worth realising that good bond film ≠ good film. Let’s be honest here, there are 4 or 5 Bond films that translate as good films - the rest of generally guff.

#Compulsoryweddingchat – not much to report. Except I think this phase is probably going to be known as the ‘Battle of the Floral Budget.’ At least that trauma is offset by us organising the cake which is likely to be from 101 Bakery in Newington. I’m just hoping there is many a tasting session. The main perk of organising a wedding is, of course, that it culminates in me marrying Hannah next year - but a year is a long time in wedding planning. So, the prospect of being able to eat “free” cake & wedding food and hopefully taste “free” wine is a solace I am clinging to.

Speaking of Hannah, she should be making an appearance on the 8th September – just to prove to you all she is indeed real & not a figment of my imagination, as much of these reports tend to be. If not then, she will be at the TT Series After Party on 24th September, even if just to help me stagger home – (sign up here TT Series Social Night - Eventbrite) .

So to the Yak. 36 riders signed up last night, with 34 competitors. A few family race-offs and a Ronde race off were in prospect as I had made sure to best manipulate the startsheet for this to occur. However, similar to a few weeks ago we encountered a few number issues. Thus to breakdown what Oliver & Michael had to navigate:

Like a well-oiled machine! Thanks to Oliver and Michael and the other volunteers for thinking on their feet with this!

As well as those who missed starts and got jiggled around there was an unfortunate puncture for Simon Titmuss. Hence why his finish time was 20minutes after everyone else. Simon didn’t get lost or end up at Archerfield House or something, he managed to puncture on the Yak. Which when you think about it is especially unlucky to puncture 2km into a 3.5km race! Simon managed to fix his bike up and got home safely.

There were 8 under 18s last night. Some of whom were part of family stand offs – think the end of the Good the Bad and the Ugly without the guns, death or bags full of gold. 2 youngsters were in the top 10. First off, was Kasey Park improving on her previous Yak HC time by 1min 16seconds & finishing in 09:28. Theo Cunningham was the other under 18 not in the top 10 or as part of a family race off – Theo who I believe did his race up the Yak but then felt he could do better, so went and did it again. I don’t know how kids do it. This thought was hammered home when Hannah, her friend Judith and I went trampolining on Monday – kids were bouncing around like no tomorrow, whereas I was gingerly bobbing around wondering if this next bounce will dislodge my hip. How children have the energy without the assistance of coffee is a mystery to me. Sorry, back to Theo, Theo finished just outside the top 10, in 12th place in a time of 07:19 – I am not sure if his 2nd go was better or not.

Now to the ‘Fighting with my Family’ section - Hibberds, you will go on my first whistle. We had children Redd & Charlie vs Dad Lee. Family pride was on the line and bragging rights over the baked beans, potato smiley faces and chicken dippers that night (I have no idea what the Hibberd family eat, I just went full 90s nostalgia there). Redd was the victorious Hibberd finishing in 07:53. Dad, Lee, was 2nd Hibberd in 08:45 and Charlie aged 12 and the youngest competitor on the night finished 3rd Hibberd in 09:22. Kidd’s, you will go on my second whistle. We had Molly and Bruce. Bruce narrowly won out the Battle of the Kidd’s finishing in 08:37, with Molly 8 seconds back in 08:45. Easton’s, you will go on my third whistle. Eric and Alasdair – both regulars of the TT series this year would fight it out for family pride. It was another close one again, this time with the son coming out on top. Alasdair finished in 08:06 with Eric 3 seconds back in 08:11.

As well as the family race off’s there was also a mini Ronde CC race-off between Fiona McDonnell, Adam Brennan, Euan Baxter and Simon Titmuss. We, unfortunately, already know of Simon’s fate here. Again, it was another close one. Adam Brennan won the mini Ronde race-off beating Euan Baxter by 1 second. Adam finished in 07:41 and 17th overall.

Fiona though not victorious in the mini Ronde race-off, was the victorious woman on the night – for two Yak’s in a row. Can she make it a hattrick on the 8th September? Fiona finished in 08:07, improving on her time by 52 seconds. Sarah Scott of ERC was 2nd in 08:36 and Molly Kidd 3rd in 08:45.

Like the initial Yak where Oliver Teenan wore the sole TT bike dunce hat, we had one person ride a TT bike last night whereas all others were on road bikes. That wearer of the dunce hat, yet victorious in the TT bike category was lil ol’ me. Short of actually missing your start, I think I actually conducted the worst start possible. I wasn’t clipped in when it was time to go, so I told David not to push me yet until I was. I then thought I was clipped in – I wasn’t. Damn aero pedals. So for a circa 7 minute effort, I spent the first 20 seconds or so fumbling around like a sweaty octopus trying to unhook a bra. (I think that’s my favourite line from the Thick of It). I managed to finish 8th in 07:05, and of course 1st TT biker.

As well as talking about chips, Chris Howie suggested he should win the mid-table mediocrity award. In true style, Chris finished 14th in 07:29 – 3 seconds shy of Neil Bell in 13th and 1 and 2 seconds ahead of Keith Froude and Warren Crombie.

Now the top 10, we didn’t have a 10th place as such last night but a joint 9th. 9th was shared between Louis Moorehead of Ronde CC and Josh Dow of Roarsz Performance in 07:07. Josh will know the area well as on his first 10M TT of the year her carried onto Haddington rather than doing the loop the loop at the A1 junction. I was 8th and I’ve probably spoken enough about me. The top 7 all went under 7 minutes. 7th was 15 year old Cameron Adam of Musselburgh CC in 06:46. 6th was Grant Scott of Ronde CC in 06:32 a time that would have won two weeks ago!

The top 5 was made up of Rory Downie in 5th – I think we’ve found Rory’s kryptonite. Bear in mind Rory has won 6 of the 7 5M, 10M or 15M TTs! Rory’s Cape Epic partner Chris McCarthy was 4th going 50 seconds faster than two weeks ago in a time of 06:24. Victorious two weeks ago, but 3rd last night was Alan Dean who finished in 06:19. 2nd and his first time racing the series in 2021, was whipper snapper Elijah Kwon who almost went under 6 minutes in a time of 06:02. To nobody’s surprise the winner last night was Ciaran McSherry of ERC, Ciaran blasted around the course in 05:47 meaning he had a 15 second winning margin!

I am away next week (collective ‘aaaaaawwwww’) but will liaise accordingly and make sure the necessary race admin is done and sent over to volunteers.