Former ERC President Ken Whitson has been awarded the Scottish Cycling Badge of Honour for services to the sport. He is seen here being congratulated by SC president, Tom Bishop.

A well respected Chief commissaire, President, race organiser, coach, track official, marshal, rider hodder upper and tea boy. There is virtually no position within the cycling club and cycling community that Ken hasn't done or advised on over the years. He is still very active and enthusiastic about the sport and there are not many club events he doesn't volunteer at in some capacity.

Specifically there are two periods that can be identified in Ken's long involvement with cycling.

Ken’s riding career started in 1961 with the Dunedin Cycling Club, one of 10 Edinburgh clubs. Early on he was spotted as a sprinter based on his blistering starts in roller-racing. This proved to be true, as he became not only Scottish roller-racing champion but more importantly, Scottish sprint champion in 1968. Another of his fortes was hill-climbing, for which The Dunedin was well known. He won many local climbs and was a member of a team that won the Scottish Hill-Climb Championship. There is a report of him winning a crit at the Isle of Man week where he competed in a plethora of events including time-trials and track races. On his return he competed on the Grangemouth track where he took a flying exit over the barrier which required him to seek hasty dental work for his forthcoming appearance as a best man.

An old newspaper cutting shows him advocating the construction of a velodrome at Meadowbank for the 1970 Commonwealth Games. The original plan was to make do with the existing track at Grangemouth. Ken was one of six who submitted a paper making the case for an Edinburgh track. Another signatory was his close friend, the late Alan Nisbet, recipient of the 1996 gold badge of honour.

Ken was chosen to compete for Scotland in the Commie games at the venue he had a hand in realising. He committed himself fully by quitting his job to prepare, so he could train and rest over the summer. In the event, he was eliminated in the second round repechage. Ken’s time was 12.0 seconds, mind you the gold medallist, Australia’s John Nicolson, only achieved an 11.6. These are somewhat off Matthew Glaetzer’s first round time of 10.252 at the Glasgow games. We could speculate as to how far Ken could have progressed in today’s well funded sports environment.

A circle was closed when he became a manager of Meadowbank on which he had worked and competed. He was present at the final tribute to the facility in September 2017, prior to its closure.

I doubt that all these achievements, fine as they are, would qualify Ken to receive this award. JFK said, "ask not what your country can do for you, ask what you can do for your country." Ken has done, in spades. Just listen to his contributions to the sport.

In 1968 he was already secretary of his club. He was manager of an East of Scotland team in the Scottish Milk Race. Through the sixties he, with others, organised the Dunbar race weekend sponsored by the Scottish Milk Marketing Board. Crowds of 11,000 were reported, 12 deep in places. He worked on this until 1971 when he left to work in Yorkshire, and then further afield.

This was not Ken’s only interaction with the SMMB. He and another ‘grandee’ of the SCU took a train to Switzerland and cycled back to the UK. They had been commissioned to pick up a vehicle from near London and drive it North for the Scottish Milk Race. The duo collected the car only to find the tank was empty of fuel, and their pockets empty of cash because of the beers consumed during their journey across Germany.

He had a hiatus from cycling from the 70s to around the millennium which allowed him to spend time with his young family.

His contributions during his second period of involvement that are perhaps better known to this audience and have been most noteworthy.

He has been the president of Edinburgh Road Club.

A former ERC president said, ‘Wherever I went, Ken was there working’. He carried a vast work load promoting or supporting most of the numerous ERC events and even now, lays out course signage for the majority of races. Last year he promoted a round of the national youth track omnium here in Glasgow. All this harks back to the Dunbar weekends of the 60s.

Most people will know Ken as a commissaire, especially on the track, but he is also a road and mountain-bike comm. Most summer weekends he officiates at one or two events and puts in shifts during the week. He juggles the need for comms in the East and Central region; stores and distributes race kit. Thus ensuring that events promoted by all clubs run smoothly.

He became a club coach to support riders and maintains his coaching credentials.

He promoted youth cycling and was the driving force behind the set-up of ERC’s youth section in 2007. His support of the Peebles CC Youth Dirt crits and stage races earned him life membership as well as the epithet, “Legend”.

He has spent many an hour ‘consulting’ at SC HQ, one of many unpaid employees. In 2014 he received the City of Edinburgh's volunteer of the year award.

The inputs of many other people when compiling this address. Universally they backed Ken’s commendation with comments such as, “One of the most respected officials in Scottish Cycling”, “Omnipresent” and “About time”.

Ken has commanded appreciation and respect throughout both his career as a racing cyclist and as an official. Always calm; willing to help; finds work-rounds at races rather than cancel; offers practical down to earth advice; is a mine of useful information; and gives support and encouragement to new race officials.

Ken was officiating at the track champs so could not attend the ceremony, perhaps he did not want to be embarrassed by the deserved praise.

This text was used as the basis for an address to the SC AGM on 30 Nov 2019 to propose Ken for their badge of honour.

The fight to build a velodrome at Meadowbank (May 1968)

Thanks to the following people for inputs to this report 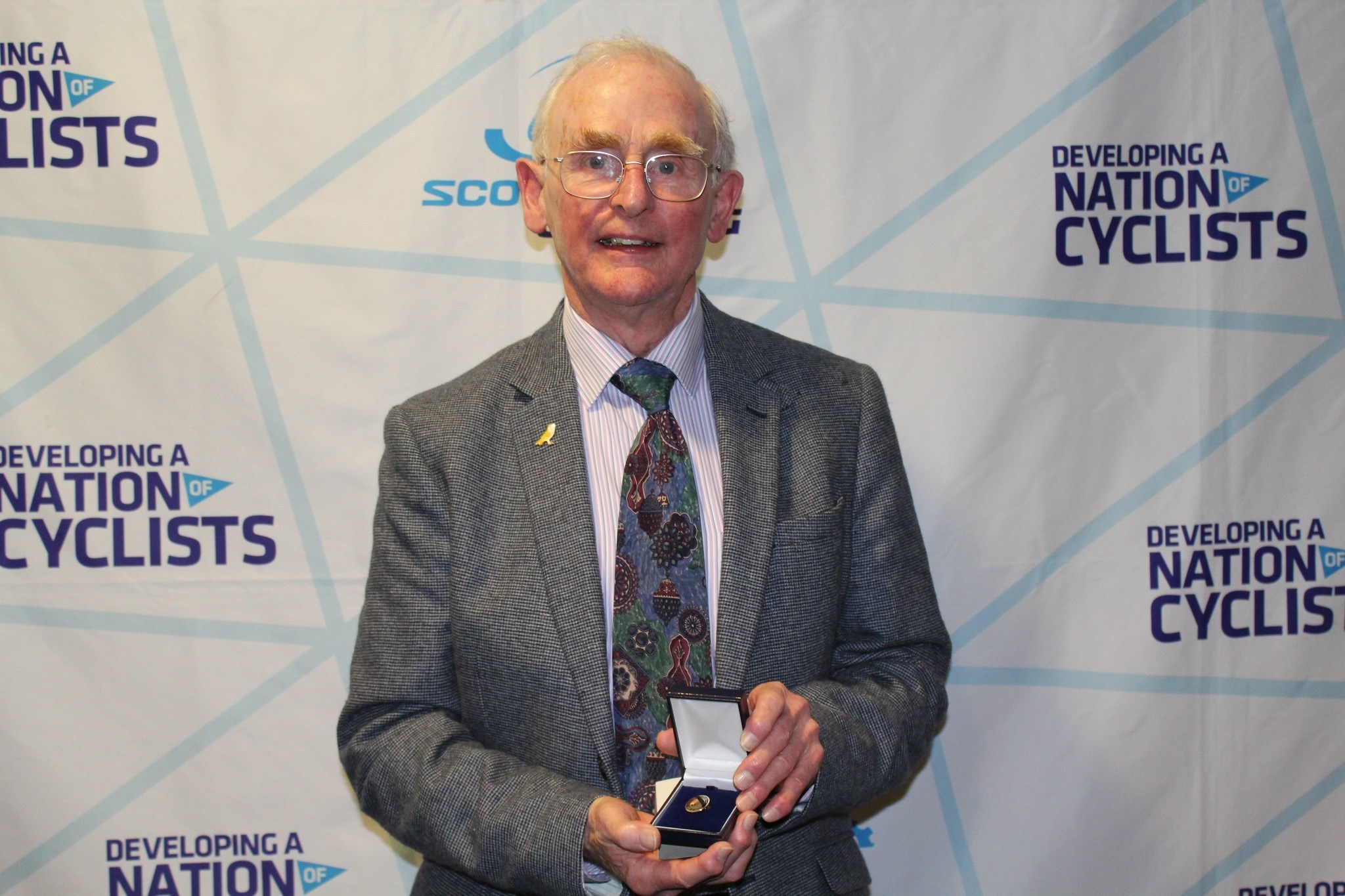 Ken finally received his medal at the SC annual awards dinner in March 2020.